The Backseat Shrink (the inner workings) 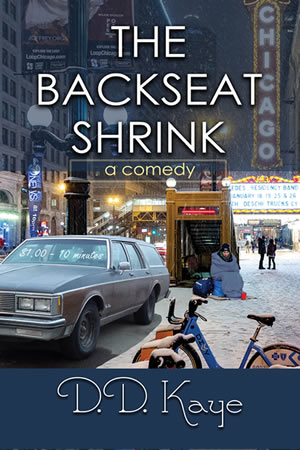 Dr. Carlton Lowe, renowned psychiatrist and wealthy cultural snob is blackmailed by his wife and long-time attorney who mastermind a scheme to cash in on his impending fame and fortune. His wife takes everything except the hideous 1970s family station wagon that had been stored in the garage for decades.

Without a legal leg to stand on or a pot to piss in, Dr. Lowe is officially homeless and living in his station wagon in downtown Chicago. He soon finds himself the backseat shrink to a cast of street denizens - the very destitute underclass who he had once blatantly voiced his outright disgust for.

Fuel fans the flames when unbeknownst to him, he’s parked in the territory of a notorious drug lord who is outraged by all the visitors to Dr. Lowe’s station wagon, assuming he’s a new gangster in town stealing his clients.

On the run, Dr. Lowe devises a plan to take down the drug lord while clearing his own name of scandal in a hilarious tangled twist of events.

Where did I get the idea for the Backseat Shrink?

The Backseat Shrink started out as a screenplay. After realizing how difficult it is to break into the film industry, I decided to convert the screenplay to a book hoping a film producer might miraculously stumble across it. I've done a lot of volunteer work for health and human services agencies and know that most people are one paycheck away from homelessness... and that there are many people who wrongly judge them. The main character of The Backseat Shrink (Dr. Lowe) is one of those people who frowned upon the underprivileged until he became homeless himself. The book is a comedy but it also addresses how people end up in the homeless system and/or resort to drugs and crime.

The setting for The Backseat Shrink is downtown Chicago. I've never been to Chicago, so it took months and months of research to understand the culture of Chicago, and to plot out various areas of downtown Chicago, finally settling upon the popular area called the Loop. I studied the landmarks, streets, establishments, the lingo and cuisine specific to Chicago. I looked at photos and read reviews about various places such as Millennial Park and the Harold Washington Library to get a realistic feel and visual of downtown. I researched the homeless crisis in Chicago and the harsh winters there. The most challenging thing was learning the slang of mobsters, police officers, psychiatrists, lawyers, street people, etc. It's amazing what you can find in Google searches! If my laptop is ever confiscated, I can only imagine that my browsing history would raise a few eyebrows. LOL. All in all, it was a helluva lot of fun writing The Backseat Shrink!